Inflation, the Fed, and the Equity Rally:

Last week, I said that this is typically a good time period in the market, but I noted that the market will be looking for more clarity from the Fed on the extent of further rate hikes.

At the press conference on Nov. 2nd, Fed Chair Jerome Powell said that they believe they will have to raise the Fed Funds rate higher than they previously expected, but he did not say what he thought the terminal Fed Funds rate might be. Bottom line, until Powell sees evidence of consistently lower prices and a higher jobless rate, the Fed will continue to increase rates.

While headline CPI has been declining monthly since summer, core CPI has been more sticky.  Positively, the October reading for Core CPI was 6.3%, down from 6.66% in September.

The market rallied nicely on that better-than-expected CPI report.  Fed Funds Futures expect rates to move modestly higher over the next few meetings and then ease in the second half of 2023.  The question remains whether the Fed agrees.

During the Q&A session at the Nov. 2nd press conference, Powell said the FOMC is “… trying to make good decisions from a risk management standpoint, remembering of course that if we were to over-tighten, we could then use our tools strongly to support the economy, whereas if we don’t get inflation under control because we don’t tighten enough, now we’re in a situation where inflation will become entrenched and the costs, the employment costs in particular, will be much higher potentially. So, from a risk management standpoint, we want to be sure that we don’t make the mistake of either failing to tighten enough, or loosening policy too soon.”

While it looks like inflation may have turned a corner, the Fed will likely stick to higher rates longer than the market anticipates, and this may lead to a hard landing in 2023.  It will also lead to more volatility if the market needs to adjust its expectations.

For now, it looks like the current equity rally may continue this week.

U.S. Markets:  The major U.S. indexes recorded strong gains this week as investors celebrated cooler inflation data suggesting the Federal Reserve may slow the pace of interest rate hikes.  The benchmark S&P 500 index recorded its best week since June hitting its best intraday level in two months.  The Dow Jones Industrial Average rallied over 1300 points to 33,748—a gain of 4.1%.  The technology-heavy NASDAQ Composite surged 8.1% to 11,323.  By market cap, the large cap S&P 500 rose 5.9%, while the mid cap S&P 400 added 5.3% and the small cap Russell 2000 finished the week up 4.6%.

Commodities:  Gold and Silver rallied along with equities.  Gold finished the week up 5.5% at $1769.40 per ounce, while Silver added 4.3% to $21.67.  West Texas Intermediate crude pulled back -3.9% to $88.96 after two weeks of gains.  The industrial metal copper, viewed by some analysts as a barometer of world economic health due to its wide variety of uses, finished the week up 6.2%.

U.S. Economic News:  The number of Americans filing for first-time unemployment benefits ticked up last week, slightly surprising economists that the U.S. employment situation is starting to cool more than expected.  The Labor Department reported initial jobless claims rose by 7,000 to 225,000.  Economists had expected a reading of 220,000.  Meanwhile, continuing claims, which count the number of people already receiving benefits, rose by 6,000 to 1,493,000.  That number is reported with a one-week delay.

Inflation slowed in October, providing relief both to consumers and perhaps the green light for the Federal Reserve to slow its pace of interest rate hikes.  The government reported the cost of living rose a relatively modest 0.4% last month—a sign price pressures are easing after the biggest surge in inflation in 40 years.  Economists had expected a 0.6% increase.  On an annual basis, inflation fell 0.5% to 7.7%, marking its lowest level since January.  So far, inflation peaked at a 41-year high of 9.1% in June.  In another positive sign, the so-called core rate of inflation, which omits food and energy, rose just 0.3%.  Economists had expected a 0.5% increase.  The increase in the core rate over the past year dropped to 6.3% in October from a 40-year peak of 6.6% in September.  The Fed views the core rate as a more accurate measure of future inflation trends.

Sentiment among the nation’s small business owners pulled back in October driven by worsening short-term expectations and a deteriorating economic outlook.  The National Federation of Independent Business (NFIB) reported its small business optimism index fell 0.8 point to 91.3 last month.  The reading remains well below its long-term historical average of 98.  Still, despite their pessimism, owners report their desire to add staff.  NFIB Chief Economist Bill Dunkelberg stated, “Owners continue to show a dismal view about future sales growth and business conditions but are still looking to hire new workers.”  The survey showed 46% of respondents reported job openings they couldn't fill, with firms in transportation, construction and manufacturing sectors struggling the most to hire workers.

International Economic News:  Canadians grew more pessimistic about the economy last month, according to a recent survey.  Maru Public Opinion’s Canadian household outlook index fell six points to 87 in October from 93 in September.  The pullback indicates that Canadians’ mood around economic matters has soured considerably after perking up slightly as summer turned to fall.  John Wright, Maru’s Toronto-based executive vice-president stated, “What I am seeing is the bleakest and most biting outlook that I have seen since we started this and for many years previous.”  Wright found that 70% of respondents believed the economy was “on the wrong track,” a significant jump from September.  The result suggests higher interest rates and increased talk of a recession are weighing on the public mood.  The last time any of the survey participants had anything good to say about the Canadian economy was back in November 2021, when 54% said they approved of its trajectory.

Across the Atlantic, Bank of England policymakers are not “inflation nutters”, according to its chief economist, but tightening monetary policy is necessary to prevent surging prices becoming entrenched in the economy, he said.  At a conference hosted by Swiss investment bank UBS, Huw Pill, the BoE’s Chief Economist stated, “We’re not meant to be inflation nutters.  We are meant to sort of manage this trade-off in a way that avoids unnecessary, counterproductive maybe, disruptions to the real economy.”  Alongside its policy announcement last week, the Bank took the unusual step of challenging the market’s pricing for future interest rate hikes, suggesting the terminal rate will likely be below market expectations.  The Bank of England has come under criticism for being too slow off the mark in its efforts to rein in sky-high inflation.

On Europe’s mainland, France’s far-right party chose a 27-year old to replace Marine Le Pen as its leader.  European lawmaker Jordan Bardella won 85% of an internal vote, marking a symbolic changing of the guard at the resurgent National Rally party.  Bardella won the nomination pledging to protect French civilization from excessive immigration.  The National Rally is seeking to capitalize on its recent breakthrough in France’s legislative election and growing support for far-right parties in Europe, notably in neighboring Italy.  Marine Le Pen is still expected to wield significant power in the party’s leadership and run again for France’s presidency in 2027.  She says she stepped aside to focus on leading the party’s 89 lawmakers in France’s National Assembly.

In Germany, Europe’s economic powerhouse, a group of top business executives warned against withdrawing from China.  The intervention by eight chief executives comes as Germany grapples with its future relationship business and political relationship with China.  The executives include the CEOs of industrial conglomerate Siemens, chemicals manufacturer BASF, technology company Bosch, auto parts supplier Schaeffler and the port of Hamburg.  They said German companies' sites in China and elsewhere in the world contribute significantly to their competitiveness, and that China has become the world's second-biggest and most dynamic market — “so our presence there is particularly important in the interest of German economic strength.”  The comments came as the German government blocked prospective Chinese investment in two domestic semiconductor producers due to national security and flow of sensitive technology concerns.

A surge of COVID cases has spurred lockdowns in the southern Chinese manufacturing hub of Guangzhou, adding to disruptions of global supply chains and sharply slowing growth in the world’s second-largest economy.  Residents in districts encompassing almost 5 million people have been ordered to stay home at least through Sunday, with one member of each family allowed out once per day to purchase necessities, local authorities said.  The order came after the densely populated city of 13 million reported more than 2,500 new cases over the previous 24 hours.  Public transport has been suspended and classes halted across much of Guangzhou, while flights to Beijing and other major cities have been canceled, according to state media.  China, unlike the rest of the world, has retained its strict “zero-COVID” policy despite relatively low case numbers and no new deaths.

Japan’s cabinet approved an extra budget for the current fiscal year to spend 29.09 trillion yen ($199 billion USD) on an economic package designed to mitigate the pain on households and businesses due to rising prices.  Putting fiscal restraint on the backburner, the government will issue bonds worth 22.85 trillion yen despite its debt already being more than twice the size of its economy.  The key feature of the economic package is reducing utility bills for Japanese households. The average household would save around 45,000 yen between January and September when the package, intended to lower electricity and city gas prices on top of gasoline and kerosene, is implemented.

Finally:  Real estate flipper OpenDoor made quite a splash when it went public via a SPAC merger in December, 2020.  And why not?  It was going to upend the real estate “flipping” market via its revolutionary AI-driven algorithms which it employed to buy and sell homes around the country.  Even when competitor Zillow exited the market with heavy losses, OpenDoor carried on (perhaps because, unlike Zillow, buying and selling – flipping – homes was OpenDoor’s only business).  It has piled up losses totaling an astounding $2.2 billion through Q3, $923 million in Q3 alone.  Now sitting on 16,873 empty houses (as of Oct 31) in a terrible real estate market, OpenDoor’s Artificial Intelligence might be dubbed Artificial Stupidity.  Its stock has reacted more intelligently: it has tanked about 95% from its euphoric highs.  (Chart from wolfstreet.com) 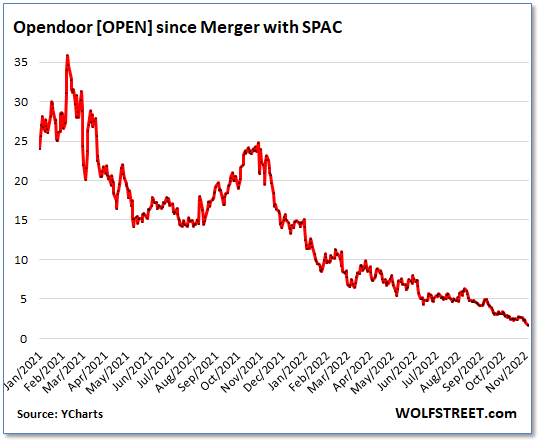 *Our indicators represent a multitude of timeframes, from days/weeks or months at a time, to a quarter at a time, to the typically years-long reading of the Cyclical Bull or Bear status.  Our Bull-Bear Indicator for U.S. Equities uses comparative measurements over a rolling one-year timeframe.